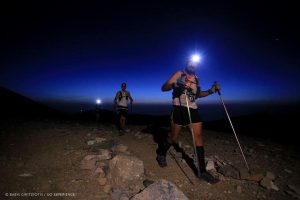 The 6th edition of Olympus Mythical Trail (OMT) came to a conclusion, Saturday, July 1, 2017. For those who have experienced as participants was undoubtedly a huge physical and psychological hardship because of the unprecedented heat wave prevailing this weekend. But a race of this magnitude and with the characteristics of OMT, can only show it’s wild aspect, as it happened this year! Olympus is a quirky mountain and pays justice to the reputation that carries since ancient times, constantly inflicting a host of adverse conditions and obstacles to those who decide to visit it. This year’s race was from the start a race to survive the scorching heat.

On the afternoon of Friday, June 30, 174 athletes toed the line at Aiyannis in Litohoro, ready for the great adventure, in Greece’s hardest ultra event. The start of the race found several athletes leading the race, but until the first 30km on the outskirts of Litohoro, a lot had changed with many in the leading pack dropping out (Matras, Laval, Prokopenko, Baranow & others) affected mainly by the heat. Gradually, the upheavals continued, as others began to give in to the extreme heat wave, even in the night. The situation began to stabilize after the first third of the race in Litohoro (K-32), with Vassilis Michos leading and right on his back Aleksei Tolstenko and Robert Dudzik. In the women's race, Mariya Nikolova had already gained considerable time from other competitors and was already in 6th place overall! Further back in the race, dropouts due to heat followed one another, decimating the starting pack of athletes. Tolstenko took the race around half-race at Petrostrouga (50km) followed by Michos and Dudzik battling for second place in the night. Eventually Tolstenko after establishing a comfortable margin 10-15 minutes from Dudzik, kept up till the end and crossed the finish line in Aiyannis on Saturday morning in 15:36:06, a performance clearly slowed by the heat. In second place finished Robert Dudzik in 15:51:18 after a great race, with a third place from Vassilis Michos in 16:31:30 after having lost ground in the last third of the race. For the women’s race, the Bulgarian Mariya Nikolova found no resistance and won the race in a time of 18:55:49 that is a new course record. Second place finisher was the past year winner, the Greek Vaso Stavrou (20:51:34) and third, the American Cassandra Turner (23:48:09). In total, just 84 athletes finished the race out of 174 who started, clearly showing the toll the heat wave took on the athletes even with the one-hour extension of the race cutoff that was decided (29:00 hours).

In the statistics of this year's race, a record number of 174 athletes were at the start line from 17 different countries. For the first time, the participants outside Greece were 17% of the total. Only 48% finished the race, a negative record, that we all wish never to break it in the future. For the rest, the men to women ratio remained at 94/6. The average performance this year was a little less than 24 hours (23:41), despite the excessive heat, showing that the average level of the athletes participating in the race has increased. The average age of the athletes was 43.7 years, the youngest athlete at 21 years and the oldest at 61. This year’s event marked the first with a mandatory equipment list and this was checked for all athletes at K-88 in the race and time penalties were imposed on those find missing items as per regulations. The system of a punch out control card at six random control point was perfected this year, ensuring the fair play and forcing all to follow the exact course without any shortcuts.

This year OMT was supported by over 150 enthusiastic and professional volunteers in about 20 locations along the route. The race was supported by 60 members of the Hellenic Rescue Team that had to be called in action in many occasions during the event. Amongst the volunteers were the managers and personnel of the mountain refuges that hosted some of the aid stations making an invaluable contribution to the race. The organizers wish to express their gratitude towards the all the volunteers for their much appreciated contribution to the successful completion of the event. The 7th Olympus Mythical Trail will take place on 29-30 June 2018, with stricter eligibility criteria in order to ensure that those taking part will be in a condition to make it to the finish line in Greece’s hardest trail race!